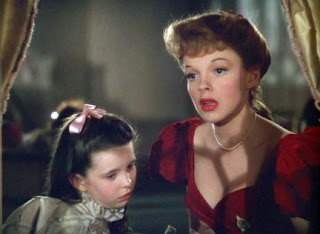 In this week before Christmas, here is a reposting of a blog that most recently ran three years ago, but I was asked about it the other day, so I think it’s worth recycling once more.  You may have missed it when it appeared before, and even if you read it, you have problably forgotten it. (Yes, you have.)

A favorite song this time of year is Hugh Martin and Ralph Blane’s “Have Yourself A Merry Little Christmas,” with its heart-warming lyrics that cheered up adorable little Margaret O’Brien when Judy Garland sang them in 1944 in Meet Me in St. Louis.

The original lyrics, however, were not at all heart-warming. In fact, Garland found them downright depressing. “If I sing that lyric to little Margaret O’Brien,” she said, “the audience will think I’m a monster.” See for yourself:
Have yourself a merry little Christmas,
It may be your last,
Next year we may all be living in the past.

Have yourself a merry little Christmas,
Pop that champagne cork,
Next year we will all be living in New York.

No good times like the olden days,
Happy golden days of yore,
Faithful friends who were dear to us
Will be near to us no more.

But at least we all will be together,
If the Lord allows,
From now on we'll have to muddle through somehow,
So have yourself a merry little Christmas now.

Though credited to Blane and Martin, the song was completely written by Martin, and he resisted changing anything. Tom Drake, the actor who played Judy’s romantic interest in the movie and a friend of Martin’s, told him: “You stupid son of a bitch! You’re gonna foul up your life if you don’t write a new verse!” So Martin finally agreed to make the song more upbeat. His new lyric was:

Have yourself a merry little Christmas,
Let your heart be light,
From now on, our troubles will be out of sight.

Have yourself a merry little Christmas,
Make the Yuletide gay,
From now on, our troubles will be miles away.

Here we are as in olden days,
Happy golden days of yore.
Faithful friends who are dear to us
Gather near to us once more.

Through the years we all will be together,
If the Fates allow,
Until then we’ll have to muddle through
somehow,
So have yourself a merry little Christmas now.

You’ll note that the “Lord” is changed to the “fates.” Apparently, Hollywood felt you shouldn't be too religious about Christmas!

In 1957, Frank Sinatra asked Martin to “jolly up” the line "Until then we'll have to muddle through somehow" for his album "A Jolly Christmas." Martin's new line—"Hang a shining star upon the highest bough"—is now more widely known than the original.

Yet another lyrical change was in store.  In 2001, Martin, a devout Seventh Day Adventist, wrote a religious version of the song:

Let us gather to sing to Him
And to bring to Him our praise,
Son of God and a Friend of all,
To the end of all our days.

Sing hosannas, hymns, and hallelujahs,
As to Him we bow,
Make the music mighty as the heav'ns allow,
And have yourself a blessed little Christmas now.
So take your choice—depressing, uplifting, or religious—but since Martin died a few years ago, at the age of 96, there probably won’t be any more versions.

The Bard of Buffalo Bayou, who is not yet 96 but after years of dissipation looks about 105, is now specializing in non-sequitur verses, which have nothing to do with the blog to which they are appended. He says it’s a new art form:

In a fierce game of bridge, I try to play smart,
And I slam down my tricks with a thump.
With a club or a diamond, a spade or a heart,
But the tricks that are best are no-Trump.
Posted by Jim Bernhard at 2:52 PM