A television program on one of the higher-brow channels featured a day in the life of a cloistered Benedictine monastery. The day centered around the canonical hours—a set of prayers known as the Divine Office, or Liturgy of the Hours—observed around the clock at intervals of three hours by extremely devout monks who apparently get by on brief snatches of sleep. 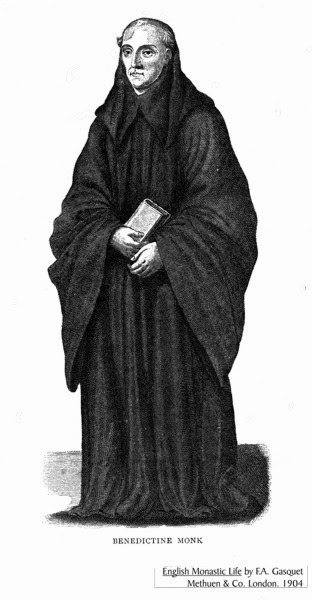 The practice began in the mid-6th century when St. Benedict of Nursia established an order of men dedicated to prayer and contemplation.

The daily prayers start at midnight with Matins, a word from the Latin matutinas vigilias (“morning watches”), derived from Matuta, the Roman goddess of dawn. Next comes Lauds, from the Latin laudare (“to praise”), at which Psalms of praise are sung. At 6:00 a.m. is Prime, so named from the Latin primus (“first”) because it is a prayer at the first hour of daylight.

Terce, or sometimes Tierce, from the Latin tertius (“third”), is the third hour after Prime, followed at noon by Sext (from Latin sextus, “sixth”), which is the sixth hour (and under no circumstances should be confused with sext in the modern smart-phone sense). None (Latin nonus, “ninth”) is at 3:00 p.m.

At six o’clock in the evening, it’s time for Vespers, which comes from vesper, the Latin for “evening star,” derived from the Greek Hesperus (or Hesper), the personification of the evening star sometimes conflated with Venus.  (A Vesper is also a James Bond Martini, which made its appearance in Casino Royale and consists of 3 measures of Gordon’s gin, 1 measure of vodka, and a half-measure of Kina Lillet, shaken—not stirred—with ice, and garnished with a lemon peel. It is not traditionally served to the monks, who, after all, have their own tasty Benedictine liqueur.)

The Bard of Buffalo Bayou, when given the chance, never fails to take part in Vespers, sometimes two.

Liturgical Latin’s
Intoned for the Matins.

Each monk applauds
The hour of Lauds.

At six it is time
To kneel down for Prime.

And they do not text
The prayers of Sext,

Nor do they phone
When they’re chanting None.

The first star of Hesper’s
Out for the Vespers,

At last, then, at nine,
No complaint—it’s Compline!