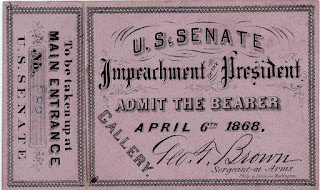 A good many people recently have been using the word impeach as if it meant to oust someone (guess who) because of misconduct. The Merriam-Webster College Dictionary (eleventh edition) even allows this meaning (“remove from office”)--as a third alternate to the primary definition (“bring an accusation against”). This ambiguity of meaning can be confusing these days when people talk (some gleefully and some indignantly) about impeaching the President.

Impeach stems from the Anglo-French empecher, meaning “hinder, stop, impede, or capture,” which derives from the Latin impedicare (“fetter, entangle”). The basic Latin roots are pes (“foot”) and impedīre (ensnaring the foot in a trap”). By late 14th century, “impeach” was used to mean “accuse,” especially to accuse the King in the House of Commons of treason or other high crimes. The shift in meaning was no doubt due to confusion of impedicare with the Latin impetere, which means “attack or accuse.”

Now for a little civics lesson (pay attention, so you may appear erudite at your next cocktail party or barroom brawl): As used in the United States Constitution, impeach means to make an accusation that an offense has been committed.  The nature of the offense is, perhaps purposely, left vague. The Constitution merely says, “The President, Vice President and all civil Officers of the United States, shall be removed from Office on Impeachment for, and Conviction of, Treason, Bribery, or other high Crimes and Misdemeanors.“ (Article II, Section 4)

Elsewhere the Constitution specifies that the House of Represenatives has the “sole powert of Impeachment” and that the Senate has the “sole Power to try all Impeachments, with conviction requiring the “Concurrence of two thirds of the Members present.”

The punishment for conviction is limited to “removal from Office, and disqualification to hold and enjoy any Office of honor, Trust or Profit under the United States,” although the possibility of subsequent criminal indictment and trial for the same offense is suggested.

Impeachment, then, can be regarded as equivalent to indictment in criminal law, followed by a trial that will determine whether the accused is guilty or not guilty.

Two previous United States Presidents have been impeached, and neither was found guilty. (Here comes the history lesson.)

In 1868 Andrew Johnson, a Democrat, was impeached on eleven charges (“articles of impeachment”), all having to do with his firing Secretary of War Edwin M. Stanton, a violation of the Tenure of Office Act, which required Senate approval of any firing of an official for whom Senate approval was required for the appointment.

On strict party lines, the House voted 126-47 for impeachment, with 17 abstentions. The Senate vote on the first four articles failed by one vote to reach the two-thirds majority, and other seven articles were never voted on. There were 35 votes, all Republicans, for conviction, and 19 against, comprising 10 Republicans and 9 Democrats. Democrats, of course, were underrepresented in Congress since the delegates from the seceded Confederate states had not yet been readmitted.

The Bard of Buffalo, who, surprisingly, has never been impeached, has been in hibernation for a good long while, fortified by several cases of Chardonnay. Now he seems to have run low on supplies, since he is back, versifying for his vino, with this deplorable result:

There’s a big debate on impeachment,
With many a partisan preachment,
And much purple prose
About quid pro quos
And what the President’s speech meant.
On the one hand we have Jerry Nadler,
On this issue he’s nobody’s straddler,
Then there’s Collins and Gaetz,
Jordan, Gohmert, and mates--
Which of them is the chief fiddle-faddler?

Nadler said, “Listen, you chumps,
Let’s not sit around on our rumps,
We can settle this claim
With a speedy bridge game,
And the winning bid is no trumps.”
Posted by Jim Bernhard at 4:44 PM