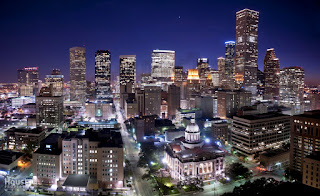 In New York, New York, where “the Bronx is up and the Battery’s down,” the term downtown makes perfect sense. Downtown is the southern tip of the island (also known as “lower Manhattan”), just as it appears on most maps—down at the bottom. Uptown, of course, is north, at the top, and midtown is in the center. These terms came into use among New Yorkers around 1830.

But downtown developed another meaning, as Petula Clark told us in the ‘60s. It’s where you can “listen to the music of the traffic in the city,” and where the “lights are much brighter,” and where you can “forget all your troubles, forget all your cares.”  In that sense downtown has nothing to do with direction; it means “central business district.” Traditionally, downtown is not only the commercial heart of a city, it’s also where most of the stores, hotels, theatres, restaurants, night clubs, and traffic congestion are found.

This meaning became widespread in North America around 1900. Of course, in recent years suburban flight and urban sprawl have diminished the importance of downtown as a city center.

How did this usage of downtown come about?  Opinions differ. Some say it’s because suburbs were typically built on higher ground than the central part of the city. Possibly this is because many cities were originally founded on rivers, and to gain easy access to the water, they were situated at the lowest area in the river valley.

Other people say that downtown has its origin in the direction of a river’s flow with reference to a given point. If the given point is the earliest settlement in an area, further development likely occurred downriver, as movement of goods and people would have been easier in that direction.

The Bard of Buffalo Bayou doesn’t get downtown often any more; he says the hustle upsets his artistic equilibrium. Most people would say he had no equilibrium to begin with, owing to that third glass of Chardonnay.

An entrepreneurial clown
Liked to wait on a corner downtown.
Then he would holler,
“Give me a dollar,
And I’ll stand on my head upside down.”