Blighty Is A Bit of All Right 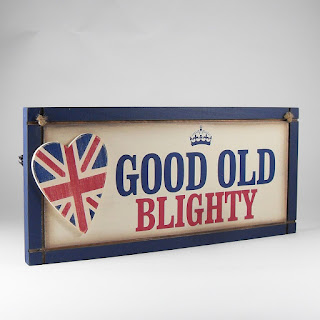 A friend in Mauritius recently wrote to me of his reminiscences of the days when we both lived in Blighty. Blighty, or “dear old Blighty,” as it’s most commonly known, is an affectionate name for England primarily used by expatriates as they long nostalgically for the joys of home. The word originated in Victorian India under the British Raj and became widely used during the Boer War and especially in World War I, when it showed up in poems about homesickness on the battlefield by Siegfried Sassoon and Wilfred Owen.

According to most sources, the origin of the word is the Urdu vilāyatī, and a regional variation, bilayati, which apparently meant “courage,” but came to be used as a synonym for “foreign” or “European” and later, specifically, “English.” During World War I, the British War Office published a magazine called Blighty, with material written by men on the front lines. From this came the term “Blighty wound,” which was an injury severe enough to get a man sent home, but not bad enough to be life-threatening. (It was not unknown for such “Blighty wounds” to be self-inflicted.) In the 1950s there was a racy humor magazine called "Blighty."

The Bard of Buffalo Bayou sometimes thinks about his days in dear old Blighty, where fish and chips were only a shilling and a half-pint of bitter could be had (in one of the less fashionable pubs) for eightpence. That was before the Bard had established his reputation as purveyor of execrable verses of questionable taste, such as:

There was a young lass from Old Blighty,
Who fancied herself Aphrodite.
It set off alarms
When she flaunted her charms
By parading around in her nightie.