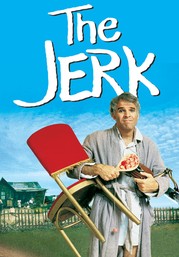 There is no shortage of words for offensive people—many of them vulgar terms derived from the names of body parts that are not uttered in polite company. One of the seemingly more acceptable words, which has stood the test of time, is jerk.  But its origin may not be as squeaky-clean as we think.

Jerk, defined as a “tedious, ineffectual, or stupid person,” has been around since the 1930s, and most etymologists trace its origin to the phrase “jerkwater town.” Such a town was too small to have a regular railroad station, but since steam engines needed water periodically, these villages served as “water stops,” where trains would remain only long enough to fill up. The water was usually held in a tower with a hanging chain, which the train’s boilerman would “jerk” to start the water flowing. Hence, the towns were known as “jerkwater towns.” Traveling carnival performers began to refer disdainfully to people who lived in these insignificant towns as “jerks.” The term gradually came to have a wider application to anyone deficient in certain desirable qualities. Today you can even find numerous jerks in our largest metropolises.

The verb jerk, on which these meanings are based, means to "lash, strike as with a whip." It was first used in the 1540s and is probably echoic in origin, suggesting the sound that might be made by hitting certain things. By the nineteenth century jerk was a noun meaning an "involuntary spasmodic movement of limbs or features."

These meanings have nothing to do with the method of preparing food that we find in “jerked chicken” or “beef jerky.” This jerk comes from the Quechua word ch’arqui, which means dried and salted meat.

The Bard of Buffalo Bayou’s products can also be dry and salty, as well as tedious, ineffectual, and stupid.

A king of Persia named Xerxes
Plans to confiscate land that the Turks seize.
When he looks at a map
Drawn up by some sap,
He snorts, “They’ve got more than that jerk sees.”