And Away We Skedaddle!


Irving Berlin was a man of paradoxes.  Born in either Siberia or Belarus (opinions differ), he didn’t set foot in the United States until he was five—but still became a songwriter of iconic Americana. A Jewish agnostic, he nonetheless wrote the songs most closely associated with the Christian holidays of Christmas and Easter, as well as the hymn-like invocation of the deity “God Bless America.”  Speaking only Yiddish until he was seven, he became a lyricist fluent in the nuances of American idioms.
Irving Berlin, 1910 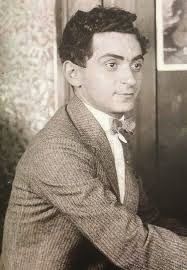 One song that shows Berlin’s mastery of Americanisms was “I Got-A Go Back to Texas,” written for a 1914 Broadway show called Watch Your Step.   The fact that Berlin had never set eyes on the Lone Star state did not deter him from rhapsodizing about the “western sun blazing by the Rio Grande” or the “cattle grazing on the prairie land.”  In one lyric the singer proclaims, “I’m simply aching to skeedaddle upon a horse without a saddle."
Skeedaddle, or skedaddle without the double “e,” as it is more commonly spelled, is an Americanism, first used around 1860 as soldier’s slang in the Civil War.  It means to “retreat hastily or precipitately, in fright” or, in other words, to “run away.”  Whether Berlin understood it in quite this way is doubtful—few of us would be simply aching to flee in panic.
The etymology of skedaddle is thought to be an alteration of the British dialectical scaddle, to “scare or frighten,” which stems from an earlier adjective that meant “wild, timid, or skittish.”  It’s from the Middle English scathel (“harmful, fierce, wild”) and is originally of Scandinavian origin, akin of Old Norse skathi (“harm”).  It is also probably related to the Greek skédasmos, or “scattering.”

The Bard of Buffalo Bayou has been known to skedaddle on numerous occasions and for good reasons that we won’t go into.  He tries to settle his nerves by repeating this mantra over and over:

Whenever you need to skedaddle,
Stay calm and straddle your saddle,
Don’t addle your poor noggin,
Just paddle your toboggan,
And say to the world, “Fiddle-faddle!”